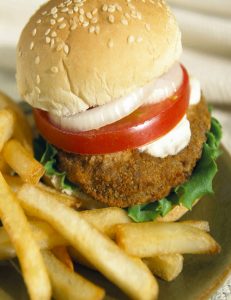 Sunday, November 3rd is important in two ways.  First, it is National Sandwich day.  What better day to re-introduce a very popular sandwich.  Second, it’s a reminder to customers that one of its main competitors–Chick-fil-A–is not open on Sundays. In its 20-second ad, a highway sign shows Chick-fil-A’s “Closed Sunday” tag; an “Open Sunday” tag is added for Popeyes.

The original release of the sandwich, in August 2019, went viral after a twitter war with Chick-fil-A.  The twitter war eventually grew to include many other restaurants’ chicken sandwiches.  For Popeyes, the response was overwhelming. Inventory that had been forecast to last two months ran out in two weeks, and the chain had to temporarily remove the sandwich from its menu.

This post is based on the Thrillist article, Popeyes Just Revealed When Its Chicken Sandwich Is Coming Back, by Kat Thompson, October 28, 2019, and the YouTube video, Open Sunday, by Popeyes Louisiana Chicken, October 28, 2019. Image source: Purestock/SuperStock

1. What advice would you give Popeyes on its chicken sandwich re-introduction?

2. What operations management decisions will be important with the re-introduction of Popeyes’ chicken sandwich?

Guidance: The initial decision that drives many other decisions is the forecast of demand.  Obtaining an accurate forecast will be difficult.  Does the original notoriety and demand continue, or has two months reduced it?  There are not very many data points to use for a forecast.

Additionally, Popeyes will want to ensure that waiting lines do not become too long, as was the case in the sandwich’s introduction.  Keeping the lines shorter will require more workers that are properly trained.  According to estimates, over 1,000 sandwiches a day per restaurant were sold in the original introduction.  With more workers, the service times should be reduced, allowing for shorter waiting times.  Many of the franchises have already hired more workers.

Moreover, the supply chain cannot run out of the chicken sandwich components.  Again, an accurate forecast makes this easier.