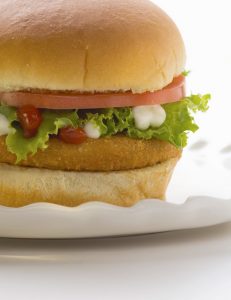 This was the beginning of a social media war that brought a great deal of attention to Popeyes’ chicken sandwich.  Other restaurants joined in the social media war, including Wendy’s and Shake Shack.

The attention, along with outstanding initial reviews of the sandwich, led to long lines and shortages of chicken sandwiches at Popeyes.  Demand for its chicken sandwich was so great that Popeyes had to stop selling it to adjust its supply chain to the unanticipated demand.  The chicken sandwich didn’t return until November 3, 2019.

Popeyes’ sales have been boosted by the chicken sandwich, with system-wide sales increasing 19% in 2020.

In the past, the chain has had other crispy chicken items on its menu, and Taco Bell hinted that this won’t be the only one this time, either.

1. Why would Taco Bell enter the Great Chicken Sandwich War?

Guidance: The initial thought is that a chicken sandwich doesn’t go with the Taco Bell menu.  But, with the popularity of Popeyes’ Chicken Sandwich and the general growth in the chicken sandwich market, Taco Bell obviously wants to capture some of this success.

Almost every major fast food company has either developed a new chicken sandwich, or remade its chicken sandwich to gain a piece of the market.  Interestingly, Taco Bell had a similar product back in 2010 in the Chicken Flatbread Sandwich.  These were offered off and on until approximately 2016.  They have somewhat of a cult following with a Facebook page that suggest that they be brought back.

Guidance: Taco Bell isn’t totally starting from scratch.  The company has been down the crispy chicken route before.  For example, its Chicken Flatbread Sandwich was introduced in the summer of 2010.  So, some of the problems they will face are not new.  Possible issues include finding a supplier for chicken patties, having the right production equipment, and adding complexity to the menu.

Finding suppliers for chicken patties has been an industry-wide issue.  Initially, there were shortages of chicken patties, especially at the beginning of the Chicken Sandwich War.  However, supplies have caught up with the increased demand.

Another ingredient that should be considered is the Flatbread.  However, it is currently used for other items, such as Chalupas.  Taco Bell’s chipotle sauce is also used on other menu items, such as the Chicken Chipotle Melt.  Future menu items will use crispy chicken, adding efficiencies to their operations.

Of course, the restaurants need the equipment to make the new menu item.  One of the biggest issues is the deep fryer.  Taco Bell already has deep fryers in its restaurants, so this shouldn’t be a problem as long as the equipment has the capacity for all of the items that use it.

Interestingly, in 2020, Taco Bell simplified its menu by removing several items, including Mexican Pizza, items containing shredded chicken, and Pico de Gallo.  Many fast food restaurants have reduced menu items in order to speed service, thus reducing the time and size of drive-thru lines.  The chicken sandwich addition would go in the opposite direction of simplification, but the hope is that added sales will be worth the added complexities.

Adding new items always raises questions as to how to develop an accurate forecast, and how to handle the associated issues with inventory management.