Ready to Travel Again? Be Prepared for Flight Delays and Cancellations 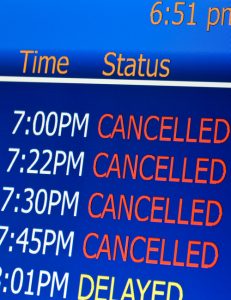 As air travel picks up this summer, passengers are reminded of the frustrations that come with it.

Long lines at the airports, delays, and even cancellations are to be expected. American Airlines passengers are especially affected because the airline is struggling to fill positions that had been eliminated at the height of the pandemic. What seemed like a sensible cost-saving strategy at the time has caused bottlenecks that are now hindering the economic recovery of the company and annoying its customers.

1. Why are there long lines at security checkpoints?

Guidance: Waiting lines are caused by variable service and arrival rates and by insufficient capacity to meet demand. In the present situation, the surge in demand and staff shortages at security checkpoints have created bottlenecks that are expected to last for some time. TSA has pulled desk workers to increase the capacity at checkpoints, but that alone will not be enough to prevent long waits. A return to normal will require attracting new workers amidst a continued risk to COVID exposure and better employment opportunities elsewhere.

2. What did American Airlines do to cut costs during the downturn? What are the consequences of the company’s strategy?

Guidance: During the downturn, American Airlines furloughed pilots and offered a buyout package to those who were close to retirement. At the time, the decision made sense. However, the company may have underestimated the surging demand for air travel in early summer as well as the difficulty to hire new pilots and retrain those on temporary leave. The imbalance between demand and capacity has resulted in revenue losses as flights are cancelled and accommodations have to be provided for passengers unable to make their connections. In addition, the bad publicity may prompt passengers to select competing airlines for future travel.

3. Explain the ripple effect of bottlenecks on the operations of American Airlines. Link it to the Theory of Constraints.

Guidance: There is currently a shortage of flight simulators and instructors to ensure speedy pilot training and certification. The training and certification bottleneck exacerbates the pilot shortage, which in turn, creates a bottleneck for air travel. Furthermore, the bottlenecks at ticketing counters and security checkpoints may cause passengers to miss their flights. Bottlenecks at the food delivery level (see video) lead to flight delays and missed connections. The affected passengers have to be rebooked on later flights, which places even more pressure on an already reduced capacity. There are several bottlenecks, and the most constraining one sets the pace and flow for the entire system (Theory of Constraints).