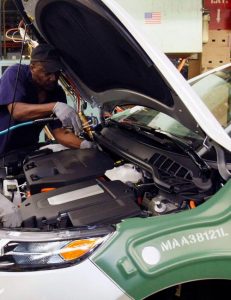 A developer of electric vans and buses bets that smaller is cheaper. UPS seems to agree.

Automobile production and assembly line have been intrinsically linked for more than a century. Volume production justifies the high capital investments. Nevertheless, Arrival, an E.V. start-up, believes that highly automated microfactories are the way to go to produce small volumes of delivery vehicles. The production relies on flexible robots able to perform a variety of tasks. This unproven approach is appealing to UPS, BlackRock, Kia, and Hyundai. Time will tell whether it can actually produce quality output at a lower cost.

This post is based on The New York Times article, An E.V. Start-Up Backed by UPS Does Away with the Assembly Line, by N.E. Boudette, April 21, 2021, and the YouTube video, Gigafactory? How About Microfactory? Arrival Rethinks How an EV is Built, by Undecided with Matt Ferrell, December 22, 2020. Image source: REUTERS/Alamy Stock Photo.

1. Why is the assembly line the process layout of choice for car manufacturing?

Guidance: The primary process characteristics of car manufacturing are repetitiveness (low variety) and high volume. In order to produce the required volume, resources (equipment and workers) are dedicated to the production of a particular model. In order to facilitate the rapid flow necessary to produce large quantities with minimal or no buffers, line balancing is used. The huge fixed costs to set up the linear assembly line with specialized resources are spread over the large number of units produced.

2. How can Arrival achieve lower costs with its microfactory?

Guidance: Unlike most of its competitors, Arrival targets the commercial vehicle market, which is much smaller than the consumer market. The small production volumes do not require the costly investments in dedicated equipment and assembly line layout. The use of a smaller space with flexible resources is therefore feasible. Furthermore, Arrival is using components made of advanced composites rather than steel, making it possible to eliminate three expensive work centers: paint shop, presses, and welding. It is also designing the vehicles with the production process in mind (see video), which may result in a better integration between CAD and CAM and less rework at the design stage. Finally, Arrival is trying to produce the vehicles close to its markets in order to reduce the costs of outbound logistics (see video).

3. According to the information in the video, what layout is Arrival using and why?

Guidance: According to the information in the video, Arrival is using flexible manufacturing cells. This is a hybrid layout that enables the assembly of even large vehicles (e.g., trucks) in a smaller space than that needed to fit a linear assembly line. Each robotic cell is optimized for a specific operation, and vehicles move from one cell to the other, not necessarily in a predetermined order. Stations can be added with less effort than in a traditional factory. Therefore, manufacturing different vehicles in the same factory is possible.