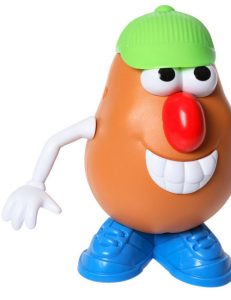 According to a company spokesperson, this allows children as young as its target audience of two- and three-year-olds to create whatever gender potatoes and families they wish.  A “family-pack” will include two large potatoes and one small one with over forty pieces for children to use to create the families of their choice.

While some welcome the change in the name of inclusiveness, others are raising an eyebrow to this level of “political correctness” in a toy targeted towards small children.

This post is based on the Fast Company article, The iconic Mr. Potato Head gets a 21st century rebrand, by Dr. Elizabeth Segran,  February 25, 2021, and the YouTube video in the Spotlight. Image source: D. Hurst/Alamy

1. What is the product life cycle and where are Mr. and Mrs. Potato Head, soon to be known simply as “Potato Head,” in that cycle?

Guidance: The product life cycle depicts the various stages in the life of a product, beginning with the introductory phase, and then moving to growth, maturity, and decline.  All products move through the life cycle, but they do so at different speeds.  Some pass through in a matter of months or years, while others, such as Mr. Potato Head, are around for decades.

When Mr. Potato Head was introduced in 1952, the kit contained plastic facial and body parts along with shoes, bodies, and other accessories. Children supplied the real potatoes or other vegetables to use with them.

At that point, while it was in the introductory phase, Hasbro spent large amounts of money teaching people about the product and how it would be used, as is typically necessary at that stage of the product life cycle.  For the first time ever, toys were marketed directly to children, and in the first year over one million kits were sold. Sales continued to increase as Mr. Potato Head moved through the growth phase into maturity, when sales were steady and the product was well-recognized and established.

Sometimes, in the mature phase, products are redesigned with new features or versions to maintain interest and sales.  Over the years, the addition of Mrs. Potato Head and the successful connection with the Toy Story movies invigorated sales and kept the product popular with new generations of children.

Eventually, all products enter the decline phase of the life cycle, but at this point, the Potato Head characters have remained popular, beloved toys in many households.

2.  How does this current rebranding fit in with changes in the external environment?

Guidance: It is important that companies carefully monitor the external environment to try to craft correct responses to the changes that are occurring around them.  Doing so allows them to continue to remain profitable and current.  Failing to respond or responding incorrectly can lead to entropy, or the tendency for businesses to become out of touch and less profitable and eventually perhaps even go out of business.

In this instance, changes in the socio-cultural dimension of the external environment have caused some family structures to change, with increasing acceptance of alternates like same-sex parents or single-parent homes.  Another way of describing this change is that customers or markets are seeking out toys which reflect evolving norms.

Finally, in the competitor dimension of the external environment, some companies like Mattel have rebranded iconic toys like Barbie to reflect different ethnicities, career choices, and body shapes.  As Hasbro tries to keep pace with its competitors, it has chosen to take things a step further than most toy companies by addressing gender issues as well.  It remains to be seen how this rebranding will be received by American consumers and whether or not this will help to extend its product life cycle even further.