End of the Great KFC Chicken Shortage of 2018? 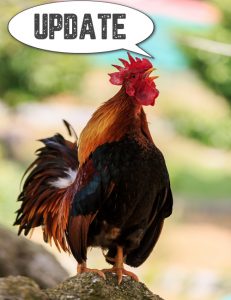 Have you been following The Great KFC Chicken Shortage of 2018? See previous OM in the News posts (KFC’s Chicken Shortage and What the Cluck Happened to KFC?) for more of a background, but to recap: In February 2018, KFC was forced to close over 700 restaurants in the United Kingdom due to a shortage of chicken.  The problem resulted from switching suppliers from Bidvest to DHL and Quick Service Logistics (QSL).

Two months after the shortage, problems continue.  As of April 21, 2018, approximately 400 of KFC’s 900 UK restaurants have a full menu in place.

That leaves approximately 500 restaurants with a partial menu, and KFC is predicting 98% of the menu will be available by early May.

According to a spokesperson from Bidvest (the original and now-rehired supplier). “Every KFC restaurant that Bidvest Logistics services will be on full menu from Tuesday, April 24.” DHL did not respond to a request for comment.

This post is based on the Telegraph article, Less Than Half of KFC Sites Have Full Menu Months after Delivery Fiasco, by Bradley Gerrard, April 21, 2018. Image source: Dima Fadeev/ 123RF.

1. What sort of evaluation should KFC perform on its suppliers?

Guidance: Bidvest appears to be doing the best job, as they have promised full availability by April 24, 2018.  DHL appears to still be struggling to deliver for its new customer, KFC.  A complete evaluation needs to be done to see the true cost differences, and the ability of DHL to effectively fulfill the contract.

2. What are the lessons learned from The Great Chicken Shortage of 2018?

Guidance: Several lessons are highlighted by this chicken shortage.  First, switching suppliers is not easy.  Great care must go into selecting new suppliers and ensuring that they have the capability to provide the services promised.

Third, you may destroy the capability of the original supplier.  In this case, Bidvest laid-off several employees.  They ended-up re-hire about 350 of these employees.  It has taken Bidvest approximately 2 months to get everything working well for the 350 restaurants that they are supplying.

Fourth, in spite of KFC’s great PR activities during the chicken shortage, there are still unhappy customers.  It is very difficult to put a price tag on their customer dissatisfaction.

Fifth, the cost savings that KFC had hoped for with the change in logistics providers are probably gone.  The loss of customer goodwill easily offsets the potential cost savings.  Although no mention is made of the cost associated with adding Bidvest back, it is probably higher than their previous contract.