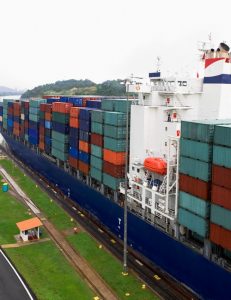 When the Ever Given got stuck in the Suez Canal, its gigantic size became a gigantic problem.

To support an ever-expanding global trade, ship size has been increasing for decades. Today, the largest ships can carry between 18,000 and 24,000 containers.  A larger cargo makes perfect economic sense because the cost of shipping one container decreases as cargo capacity increases. However, when things go wrong, big ships mean big disruptions in an already strained global supply chain. It is estimated that the stranded ship held up 12% of global trade at an estimated cost of $9.6 billion a day. This financial and logistic threat, along with more elusive cost savings in the future, may signal the need for fresh ideas in global shipping.

Video Spotlight: The Ripple Effects of the Backlog

This post is based on The New York Times article, Why the World’s Container Ships Grew So Big, by N. Chokshi, March 30, 2021, and the YouTube video, Cargo Ship Freed from Suez Canal, but Shipping Backlog Could Last, by CBC News: The National, March 29, 2021. Image source: (c) Glow Images/SuperStock.

1. Will the short-lived blockage have a major impact on supply chains? Why, or why not?

Guidance: Yes, it will take weeks or months for global shipping to go back to what is considered “normal” in a COVID world. The Suez Canal is a major maritime artery of global trade. Around 19,000 vessels go through the canal every year. When the Ever Given blocked the canal, hundreds of other cargo ships were either stuck or had to take a detour to avoid the canal. Once all these ships finally make it to their ports of destination, there will be another bottleneck with port facilities being overwhelmed by the number of containers to unload. The delays and the subsequent shortages of oil, components, and finished goods will cause some assembly lines to shut down, creating further disruptions along the supply chain. They will also result in stockouts at retailers already affected by the pandemic. If you follow the A.P. Moller-Maersk link in the article, you will see that the shipping company has already ceased short-term bookings around the world to catch up with the crisis. The short supply will drive up prices.

2. What are the primary arguments against bigger ships in the future?

Guidance: There are several arguments against bigger ships in the future. The first one is the limited number of ports able to pay for the costly infrastructure projects necessary to accommodate these the ever-larger ships. Carriers are the primary beneficiaries of these projects, but the advantages to terminal operators, ports, and taxpayers who finance them are less obvious. Second, the economies of scale achieved with larger cargo ships are fading because the potential for growth is much smaller than it used to be (diminishing returns). Third, further increases in capacity are constrained by geography with fewer waterways wide enough to permit the passage of large ships. Finally, the prospects for growth in global trade are not as good as they used to be, making it hard to justify bigger ships.

3. According to the video, what can be done to prevent this problem from happening again? What do you think of these proposals?

Guidance: To prevent this problem from happening again, two proposals were floated: 1) improving the infrastructure of the Suez Canal to accommodate bigger ships, and 2) developing  contingency plans to diversify sourcing options. Besides their high cost, massive infrastructure projects result in lower capacity and traffic jams for some time (think of road construction projects and their impact on traffic). Furthermore, contingency plans call for redundancy rather than efficiency. It is unclear how much enthusiasm there might be for longer, back-up routes that have a higher price tag. Without cooperation among governments, it is unlikely that corporations will be able to resolve these major infrastructural and logistic problems.